The New York Times’ new print edition business section debuted today, but it doesn’t seem to add much to the existing mix. The most important shift seems to be the cutesy renaming of the feature coverage:

Technology: “Circuits” (this was pre-existing, but now it has context)

Because hell, if I didn’t find commercial real estate exciting before, I am going to be just tickled pink to flip to Square Feet each week!

The Daily News gleefully thought up some new songs for the Rolling Stones’ upcoming tour:

(I Can’t Get No) Metamucil

Let’s Take a Nap Together

In this delightful mid-decade era of dotcom revivalismâVC money! hot tech stocks! freelancing!âcomes Max Delivery, a new service for downtown Manhattan. Get DVDs and toothpaste delivered to your door an hour! I’m guessing the ridiculous perks of Kozmo and Urbanfetch (movie pickup, no tipping, free T-shirts) no longer apply, but with built-in delivery fees and New Yorkers’ demanding style, this business model could rise once again.

It’s good to see my old employer, VNU eMedia, get into the world of weblogs, and with the right people involved. VNU has launched a pair of blogs, one for Billboard and one for Adweek, in an attempt to reach a larger, younger audience. (Given Billboard’s circulation woesâdown from a rate-card quote of 32,323 to a New York Times-noted 20,000 and changeâit couldn’t happen soon enough.)

The blogs themselves are hosted on blogs.com and run by outsiders with, I’d imagine, heavy oversight from the appropriate editorial staff.

Billboard PostPlay has potential. It’s staffed in part by the journalists at paidcontent.org, and Rafat Ali’s team is solid. But would someone please tell Billboard’s graphic designer to come up with a more sophisticated PostPlay logo? This one screams 1996, and it’s poorly optimized, too. Not the best way to make an impact online. Speaking of which, could someone at Billboard set up a server-side redirect so the home page actually works?

AdFreak seems to be a midpoint between Adweek magazine and, say, Gawker. Given the VNU copyright in the footer, this is an official site, but the logo and lack of a masthead makes it feel like a parody, or a foil to the similarly good-but-underwhelming AdRants. I kind of like the content, but chalk this one up as a work in progress.

Keep an eye on these blogs, and watch for the magazines’ evolution as well. Billboard’s new print redesign promises an interesting evolution, one that I hope my old friend Ken Schlager, now Billboard’s co-executive editor, will turn into an unqualified success.

Back in March I popped into del.icio.us the stock charts of 10 listings that were sent to me via email spam. I was curious whether the blind feeds led to any quick ramp-up, in days or weeks, via speculation or otherwise. Hit “read more” for the results.

Back in March I popped into del.icio.us the stock charts of 10 listings that were sent to me via email spam. I was curious whether the blind feeds led to any quick ramp-up, in days or weeks, via speculation or otherwise.

First up was Martin Neutraceutical (MTNU.PK), which arrived in an email dated 2/23. On February 23rd, the stock traded at around $1; it popped up a few cents around the 24th, then began a long and steady decline. It is now trading at $0.14.

Yukon Gold Corporation (YGDC.OB) only trades once or twice a day, according to the daily chart and volume totals. First noticed March 8, the stock has basically flatlined since then, and trades at $1, off from $1.10-1.20 in March.

Humatech Inc (HUMT.OB) went for around 10 cents on March 9. It peaked there and is 7 cents today. Not bad, as long as you only own 100 shares.

OSSI.PK no longer trades; it is now TSAS.PK and only has a 5-day chart. So much for that.

On March 10 I was urged to buy Sivalt Systems (SVTL.OB) at just under $2 a share. What a missed opportunity: the stock never broke $2 and is down to $1.35 today.

Well, four to go, or three, rather—KSIG.OB is now KSIGE.OB. I can’t follow the trend, but it’s at 6 cents, so that’s not a good sign.

Anywhere MD (ANWM.PK), unlike the other stocks on this list, actually has news items and a six-month chart. What it doesn’t have is performance: The stock had dropped from $0.20 to $0.10 before the email spam and never recovered, trading at $0.05 today after a brief spike down to almost $0.

The charts of Yap International (YPIL.PK) and DSI Direct Sales (DSDI.P) look like the other ones above: on the decline before the spam, no different after. Both have a value half of that when the spam first hit my in-box.

That’s nine in a row gone sour. Stock spam seems to operate on the “even a broken clock is right twice a day” theory, though, because my inventory review did uncover a winner.

Gaming Transactions (GGTS.PK) came to me on March 12 with a forecast in the email of “near term target 0.45, long term target 1.00.” Nice estimating: from a price around 30 cents in mid-March, the stock burst past $0.50 in early April and is trading at $0.74 after peaking at $0.90. An investment in this stock would have nearly tripled in value in three months, a pretty good return on some junk mail.

I’m not a financial analyst, so I won’t get into the specifics of ROI for my experiment. The findings are clear, though: you too can have a winner playing stocks in spam messages—you’ll just have a lot of losers along the way. 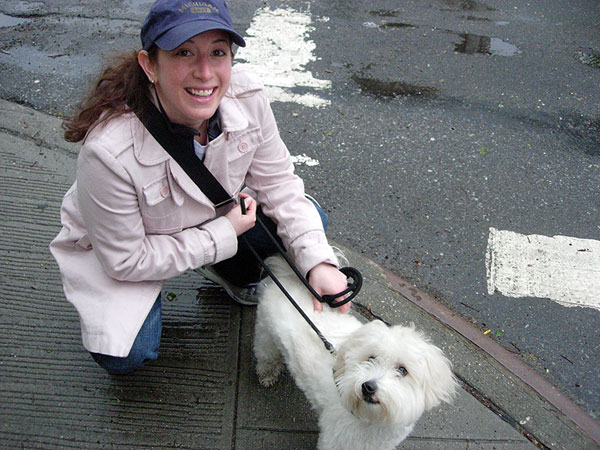 We had a lot of fun at the Dogswalk on Sunday. Here’s a brief collage of the sillier moments. (Somehow only the ridiculous dogs were worth photographing.)