I suppose I am compelled as a New York blogger to post about the transit strike that began this morning. In a nutshell: the action is ridiculous, because the transit union is legally forbidden to strike; that said, I’m with the TWU on this one, because the MTA is a textbook example of a poorly run government agency that doesn’t properly prioritize; yet within that, I had a nice commute this morning, in a car without traffic.

One of the biggest lessons to learn in business is how to communicate with warmth and appreciativeness, even to a perceived adversary. It’s a lesson I use nearly every day, and one I am constantly fine-tuning and trying to improve.

One of the biggest lessons in life in general is not to be a sore winner. This is evident in myriad public competitions, from newly elected political candidates congratulating their opponents on “a hard-fought race” to athletes like football’s Brett Favre pausing mid-celebration to shake hands with the opposition.

Somehow, the gentle and polite Randal Pinkett missed both these lessons. The winner of season four of “The Apprentice,” Randal, upon being hired, strongly said no to the suggestion of Donald Trump’s hiring Rebecca Jarvis, Randal’s impressive (and formerly friendly) competitor.

I personally can’t figure this one out. What did Randal have to lose by welcoming Rebecca into the fold? He apparently disliked the prospect of not being the apprentice, and I’m tempted to give him the benefit of the doubt: that when at the boardroom table opposite the Donald, the only thing a candidate considers is his or her own survival.

But in rebuffing Rebecca, he became the instant enemy of all her fans, and likely lowered his prospects for book deals, speaking engagements, and long-term success in the public arena. It was a huge misstep by someone whose grace under fire was celebrated by his teammates.

Randal could have had it both ways. The right answer to Trump’s suggestion of hiring Rebecca? “Mr. Trump, I am proud to be The Apprentice, and with that matter settled, I would be equally proud to have Rebecca join us in the Trump organization.” Randal has a title, Rebecca has a job, and they could both enter into years of public glory.

I suppose winning with style is a lesson that Trump can try and teach his new apprentice.

Some of us make our careers in traditional ways. I, for example, work on the Internet, and am at a desk or in a conference room much of the day.

My wife, on the other hand, does stuff like this: 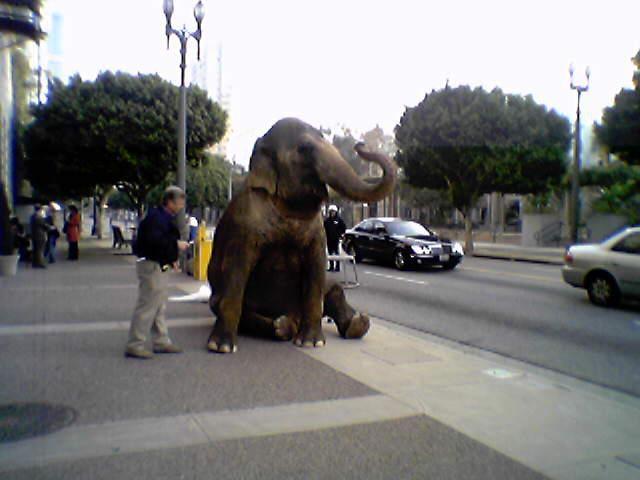 I enjoy the casual card game, and from time to time I play poker and its many variants with friends. One of the more popular but frustrating games to play is Acey-Deucey.

The rules to Acey-Deucey, or In-Between, are fairly simple: dealer turns up two cards in succession. Player must make a bet in accordance to the expectation that a third card will fall within them. Win, and take the bet from the pot; lose, and pay it in. If the third card matches one of the first two, the loss is doubled. The game ends when someone gets a big spread, yells “Pot!” and wins the hand.

Acey-Deucey is popular because of the suspense and general table-wide humiliation that it causes. All too often someone calls “Pot!” on a decent hand and loses. This leads to a nice round of razzing and a larger pool of money for everyone else to conceivably mine.

The problem with this game, from a player’s standpoint, is that one’s chances of winning are pretty terrible. (You know the chances are against you if a casino is willing to play you and give you odds.) Let’s take a closer look.

There are 13 cards in a deck of cards, 14 if you count the ace as both low and high, since the ace can sometimes be low in this game. The only opportunities to win in Acey-Deucey are the thin windows in between the two drawn cards. At absolute best—ace low, ace high—the player has a 12 in 13 chance of winning on the next card. Usually, however, the cards are closer together, and that’s when problems set in.

Moderate hands are actually the most dangerous. Nine-2? Sure, why not? But the odds drop to 46% on 9-2, enough to make Foxwoods some money and cost the player some coin. I’m not running full data at the moment, but a good number of hands are tight spreads like 3-5 or 7-8 that have nearly nonexistent chances of winning. All these hands do is up the size of the pot for a daring soul in a lucky moment.

Of course, some hands are solid; King-2 runs 10/13, or 77%, to win. But put fifty dollars jellybeans in the middle of the table and six friends saying “POT!” and suddenly you’ve got a nice maelstrom of aggravation on your hands. Which, of course, is why it’s fun, but also why I can’t stand the game.

Food poisoning is having what you think is a good meal and going to sleep as though your life will be normal the next day, even though you are about to forget the definition of the word “comfortable” for the next two days. Then it’s waking up and thinking something is wonky in your stomach, and maybe dinner didn’t sit right, but you didn’t eat the four-cheese appetizer, so what’s the big deal?

Next comes a few hours of internal wooOOooOOooOOoo, as though your stomach is working hard to keep things running properly, coupled with weird waves of “man I just don’t feel good” that don’t quite match a stomachache but they’re coming on stronger and stronger and ew is that nausea? because nausea is just the last thing you want to deal with and maybe if you had some flat Coke you could calm down a bit, or maybe a nap is a good idea.

Ah, and then you’ll get the idea that you should power through your queasiness and just eat something, because maybe you just need a fresh base in your system. This is usually the fatal error. It doesn’t take long before your insides figure it out: “that’s it, we need a full evacuation, stat.”

A few minutes later you find yourself crouched in front of a porcelain bowl, food coming out of the wrong end of your body, ignoring the normal exit routes and infiltrating your nostrils, with none of the “thank goodness that’s over I feel better now” that often accompanies such a session, and that’s when the realization sets in: this is food poisoning.

From there it mercilessly goes downhill. You spend the next 24 hours drifting in and out of sleep, lying virtually immobile in your bed because shifting sides only encourages the sickness to emerge. Every hour or two you return to your knees, your body forcing you to push all remnants of external substance out of your system, your body straining and convulsing relentlessly, your face dripping with sweat, your body teaching you where the phrase “violently ill” originated.

Every episode, every moment is painful: not just the vomiting but the coughs and and the tiredness and the muscle strains in your neck and your chest that will linger for days. Your head hurts, your mouth goes dry, your nose bleeds. You get hot, you get chills, you perspire continuously. You burst capillaries around your temples, or maybe on your eyelids or, if you’re really hard-core, directly in your eyeballs, causing weird red welts in your eyes or even filling the whites of your eyes with blood that lingers for weeks after the sick leaves your body.

And then there’s the comedown, once you’ve gone nine or 12 hours without retching and 30 or more hours without food, when you force yourself to eat that first saltine and a few sips of flat cola, which aren’t the least bit appetizing and serve only to strike fear deep within you, that maybe you’re still under the poison spell and are tempting your stomach to strike back; and those blissful moments a few hours later when you finally, finally rediscover hunger.

This, dear reader, is food poisoning. I should know: I’ve endured it twice, most recently this week, conveniently timed to obliterate the bulk of a vacation in Florida.

EMPLOYEES MUST WASH HANDS: if only.