Courtesy RSS Digest. Looks good in the Javascript example below, although it needs customizing. 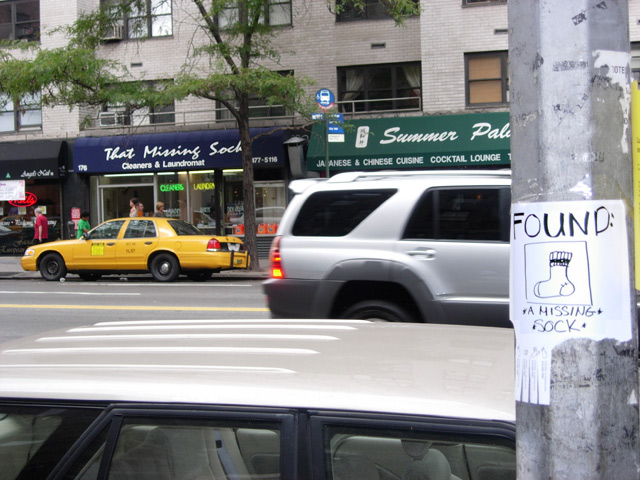 The New York Times Magazine discusses Medium Footwear this week. The focus of the article? How the consumers in its target demographic “are hard to identify and thus may not even realize that they form a class at all.”

And to think I bought mine simply because they looked cool (and back in January, no less). Does that place me outside the target demo, or squarely in it?

You are unknown to me.

Your camera’s memory card was in a taxi; I have it now.

I am going to post one of your pictures each day.

I will also narrate as if I were you.

Maybe you will come here and reclaim this piece of your life.

—introduction to I Found Some of Your Life, the most embarrassingly entertaining blog I’ve seen in a long while

The movie “Garden State” was, in my opinion, a rather mediocre movie: not particularly funny or moving, it failed to embrace me as I had been primed to expect.

I did, however, love the conceit at the heart of the film: that a young man could return home, after nine years without a single visit, and be embraced by his old friends as though times had hardly changed.

I have a group of friends from high school that has maintained itself for more than a decade. I count 10 of us, in my central core; various offshoots add several more. I refer to us as “the gang,” which my wife finds hilarious but my friends find matter-of-fact. For us, that feeling at the heart of “Garden State” rings true.

My gang is, at a glance, a pretty random bunch. Our group includes a handful of Jews, one German Catholic, one Filippino and one African-American. We live in five different states, from Boston to Chicago. Three of us still live within jogging distance of our childhood homes; two of us don’t own our own cars. Six of us are married. We count among us a policeman, a pregnant mom-to-be, an Ironman participant, an entrepreneur, four dog owners, five homeowners, two homeowners-to-be, four master’s and two associate’s degrees.

More than once my mother has asked me how I became close with my friend the cop. Simple: gym class, four years in a row, lockers next to each other, thanks to the alphabet. Life should always be that simple. Which is how we tend to view each other, simply, as old friends united by time, regardless of how often we see each other or the ways that we change.

We get together as a full group four times a year, on average. And when we’re together, the transition from past to present is almost seamless. We remain bound by long memories, effortlessly recalling frozen moments of our youth, cracking jokes new and old, enjoying each other’s company without blinking an eye. Even the events are timeless: we’ve gone rafting 7 or 8 times, held half a dozen steak dinners, been to countless pool parties. Each time, we recall “the last time we did this, when—” and forge new memories while celebrating the old ones.

Our comfort is wholly unspoken, because it’s unnecessary. Our friendship, our bonds, are known and assumed. (I am certainly the only one in the gang who would even admit all of this, much less write about it. No doubt one or more of my friends is going to read this and call me a big old sap.) And that’s the way it should be: comfortable, expected, known.

Life moves forward, and very little stays the same. My childhood bedroom is long gone, my best friend from my formative years far removed from my phone book. But I still have my gang. And that makes me a lucky man.

I’m generally not a fan of sport-utility vehicles. Bigger car, worse performance, rougher ride, worse mileageâbuy a sedan, I usually say. Or a minivan if you need storage.

That said, I love the ridiculously over-the-top International CXT. Imagine carpooling in this thing.

Two Septembers ago, my mother decides we should set the two of them up.

My brother and I resist. For a year.

Last September rolls around and my mother gets back on her bandwagon. Her boys’ friends are so nice, and if she likes them both so much, how bad could it be for them to go on a date? This time, my wife, who also knows both friends, supports her.

My brother and I unenthusiastically agree to mention it to our friends, who, being single and figuring my mother is a fairly good judge of character, say they’ll give it a go.

So I get my brother’s friend’s number and pass it to my friend over IM, throwing in the caveat that this is entirely my mother’s doing, not ours. Three weeks later, they go on a date, and the relationship quickly takes on a life of its own.

Chalk up a +1 for Speedo: I received a response to an emailed product inquiry in half an hour.

This would not be noteworthy were it not for the many companies that don’t do this well (like ATA, which took longer to respond to an email about my pending flight than it did for me to fly home).

I was a longtime Reporter staffer: weekly columnist, then editorials editor, then editor in chief through my senior year. Somewhere in that digitized archive are all the columns I wrote during my tenure. A few of them are quite good; I’ll try to hunt them down.

In the meantime, let me direct you to my first-ever newspaper editorial, on page 7 of the October 12, 1992 issue (here’s the engine; direct links don’t work). Be forewarned, it’s pretty trite, although I’m pleased to report I wrote with a strikingly similar voice.

Update: My all-time favorite column was on February 21, 1994, page 5. Unlike most of my writing from a decade ago, it still holds up.

While we’re at it, here’s my all-time favorite unpublished college essay, on a typical David Wertheimer paper-writing night. I’m pleased to report my business school assignments are usually done around midnight.

Wired News, long the place of record for online notation, has decided to drop the capital letters from Internet, Web and Net. All well and good; this has been happening elsewhere for years (I recall debating the merits of the capitalization with the editors at The Economist back in 2000).

What it references is the acceptance and commoditization of the terms. This happens frequently with new words that lose quotes or hyphens as their meanings become universal. Consider, for example, the slow conversion from “e-mail” to “email.”

However, Wired News’s justification is all wrong:

The simple answer is because there is no earthly reason to capitalize any of these words. Actually, there never was.

That’s not necessarily true. These words were capitalized because they were once considered namesâthat is, Internet was a proper noun, not just a noun. By dropping the caps, the writer has acknowledged that there is nothing personalized or particular about the word in use.

Example: “xerox” is often used as a noun and a verb as well as a company name. In print, one would write, “My photocopier is a Xerox home-office model,” but drop the capital letter to say, “I need xeroxes of this document.” The same lowercasing is now being applied to the web and the internet.

The problem here, for this author at least, is in the singularity of the terms. There’s only one Internet, one World Wide Web; these are still proper nouns in many ways, despite the increased commonality of their usage. The typical use of the article “the” before these words gives increased value to their status as proper nouns, not just nouns of ordinary use.

Personally, I am okay with the shift away from the capitalization, but I’m not ready to let go of it just yet. I do like Wired News’s assertion that internet and web each define a medium, not unlike radio and television. Still, the Internet and the Web still denote specific locations to me. Think about these analogies:

Even if the terms’ commoditization is complete, Wired News’s assertion that they never deserved their capital letters forgets the era when the Web was a fascinating new world, a destination in its own right, rather than a common vehicle for airline ticket sales. Perhaps the Internet’s maturity is just about complete.