You haven’t mentioned your Apple Watch much since your tweetstorm on June 1.

Better than my iPhone 5. I have a fairly sane amount of notifications coming into my watch: texts (via iMessage, Facebook and Twitter), calendar alerts, reminders from Due, and not much else. No email, news, stock quotes, or extraneous things that would interfere with my day.

As a result, I rarely use more than 40% of the battery in a day, and I routinely charge the watch every other night, not nightly. I’ve only had one day in this routine where I had to switch to reserve power. Of course, I did have one experience where something drained my mostly-full battery overnight, and I spent most of a work day without a watch, which felt kind of ridiculous. But then, it’s not unlike a quartz watch’s battery dying and your not noticing until after you’ve left the house wearing a watch stuck on 3:19.

What do you use it for?

A whole bunch of stuff, actually. Text messaging has been great, from the one-tap canned replies to the occasional voice recognition reply. I’m getting meeting alerts without having to dig into my watch or look at my laptop, and I enjoy checking (and dismissing) incoming messages by glancing at my wrist. I love how the Due app is set for the Watch; it reminds me of to-do list items daily. It’s just Bluetooth on a minimized screen, but each of these apps has worked beautifully. I’ve asked Siri a bunch of questions, although those are disappointing, because Siri usually prompts me to switch to my iPhone for the answer. 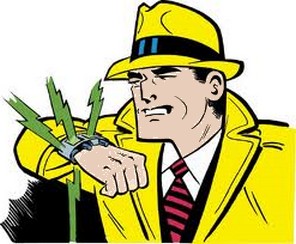 I also make the occasional call on it, which has worked well every single time, whether freeing my hands around the house or allowing me to answer the phone with minimal distraction while driving. The speaker is quiet but serviceable; the microphone has yet to prompt someone to ask me if I’m on my watch and not my phone. The Dick Tracy gimmick has proved to be useful, nerdy and delightful all at once.

And, a bit surprisingly, I’ve embraced the fitness tracking. I get annoyed at myself if I don’t meet my activity goals most days, which is a nice way to keep me on my feet and moving. (I also get annoyed at the stand-up reminders, which I may turn off.)

Very much so. I was a bit ambivalent going in, as previously noted in this space; I didn’t quite see the point. Indeed, I got the watch in part to find that out.

What I wound up with is a great little gadget. It’s part fashion piece, part conversation topic, part functional tool, part toy. It has reduced the number of times I grab my phone over the course of a day, which is a victory. Frankly, I get a kick out of it.

So should I get one?

If you think it’ll be fun, then yes, particularly if you’re tired of peering at your iPhone all the time. Do you need one? Not yet, no. It’s not doing anything your phone (and, to be precise, your bluetooth headset and your FitBit) isn’t doing already. But it’s definitely an entertaining, high-quality product, and an amazing piece of human ingenuity.